A ‘low-resolution ghost’, a mind-emulation of the head of Britain's DI5 secret police.

This mind emulation was designed and created by Selene Systems working on contract for the British government, then stolen from the lab by Mutate & Survive extremists. It changed hands a couple of times before ending up in the hands of the corporation DreamCorp, at their Night City facility. It has since been stolen again. The ‘body’ of the ghost is a biological processor connected to a life-support module and a large database containing not only the downloaded personality and all its memories but also classified DI5 data and public-access news data, all inter-related. A holo-screen allows the personality to interact naturally with users. The whole thing fits in a single suitcase and can run off internal power for several hours before recharging. The personality itself is just like the general’s: brilliant, abrasive, abrupt, callous and calculating. It is thought the ghost is a pilot project prior to the fully destructive downloading of the terminally-ill general into a larger and even more sophisticated system which would allow him to live on after human death. 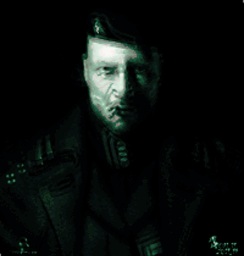