A gaunt man with pale skin that even so glitters with what seems to be implanted gold dust, with a goatee beard that often needs tidying and a trademark top hat he’s rarely seen in public without. Friedlander Bey is a bit of an enigma, probably of Franco-berber ancestry, since he claims to have been born and raised in Morocco before coming to the U.S. as a young teenager as a bagman for the Corsican Mafia. He has risen rapidly to a position of power within the underworld’s ranks and after executing the old Don Alphonse Guerini during a short but violent gang war last year is now regarded as the pre-eminent crime figure on the Northside of the Night City Core, controlling the docklands and the lucrative red-light district. As legitimate businesses he is known to own a shipping company, the famous Ottoman casino hotel, several restaurants, an art gallery, a strip club and controlling interests in both a construction company and an Islamic bank.

“The Bey” is not your archetypal crime boss, having developed an almost legendary reputation for honor, intelligence and fair dealing. He seems to be a devout Reformed Muslim and is known as a major benefactor of mosques and schools in his area. He is multi-lingual, speaking English, French, Arabic, Berber and Spanish fluently and is culturally adroit, discussing Islamic art and poetry as easily as he does gun smuggling or leveraged takeovers. He is often very hands-on, dealing directly with a wide range of contacts from street level to industrialists and financiers in both his legal and illegal businesses, modelling himself after an idealized “emir” concept he’s been formulating since his youth. That makes him far more visible than is normal for a man of his stature and career, although when in public he’s normally surrounded by his Imazighen, the small army of “free and noble men” he has formed into a personal praetorian guard by patronage and personal charisma. On the street, it’s said that The Bey will do a deal that will leave you looking for fingers you used to have, but once the deal is agreed his honor is such that he would rather die than break it or double-cross you. He would also rather you die, in a long and illustrative way, rather than stiff him or one of the many under his protection. 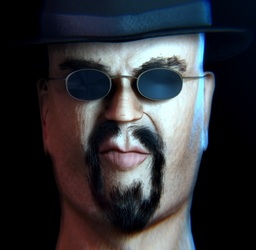