Best known to the locals in the dockland area around her business as Lady Emily, this enigmatic British woman is rarely seen and mostly confines herself to her top-floor suite at the Gomi Emporium, but when she ventures forth people are always struck by her natural grace and manner. Despite her reclusive nature, she has attained an almost street-saint reputation in the area for her efforts to help poor folk get by on very little. Almost everyone in the sector has something they got from the cavernous Emporium thrift store, whose staff trawl the garbage of much more upscale neighbourhoods or buy entire estates on consignment before selling the items gleaned at a very minor mark-up. More than a few have found one of her volunteers sliding a small credit chip into their hand, wrapped in a recycled-paper card embossed with a white mouse, just when they needed some money most. Others have found her security man, Crapaud, and a handful of helpers turning up to confront the boostergangers who would have driven them from their home and ransacked it.

In short, the people in the immediate few blocks around the Emporium – known as “Emily’s Manor” – look at Emily as they would on a feudal Lady, and she in turn treats them with the same mixture of maternal interest and dispassionate aristocratic aloofness a feudal noblewoman might use. There’s even a rumor that Emily is a real noble, one of the many displaced from Britain during its coup. She’s certainly got the kind of funds that mean she doesn’t have to run a place like the Emporium squirrelled away somewhere – her constant companion is said to be a “Sentinel” series Bengal Tiger she calls “Bagpuss” – these top of the line cloned, gene-engineered and bio-enhanced security constructs are priced in the “if you have to ask, you can’t afford it” realm. 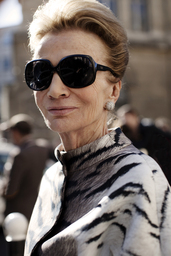