Trepanier is originally of Doler background and from Marseille in the Northern Union, a hotbed for criminal activity and smuggling. After a few brushes with the law, he joined the N.U.‘s military aged 18 and ended up working as a military policeman in his home district, where his intimate knowledge of the street scene helped him considerably. He rose rapidly, and was transferred to the N.U.’s Interpol department in Lyon as a detective dealing solely with international crimes affecting the Union eight years later. He served six years there and rose to the rank of Detective Inspector before taking “retirement” and signing on with the Umbra Corporation’s security division four years ago. Now aged 36 he has a reputation as a highly competent detective, well able to take care of himself in even the deadliest combat zone as he goes about his business – which nowadays is almost exclusively that of tracking down those who have crossed Umbra and then fled, so that the megacorp can extract its revenge.

The few who know Adnres personally find him a genuinely nice guy: honest and truthful, a man who will put himself through hell if anyone he has responsibility for gets hurt on his watch, he suffers from insomnia as he wonders if his work is entirely honorable. His few friends wonder how much longer he’ll last working for Umbra. 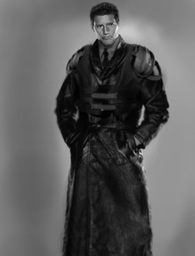