Building a Better Me

Mission Accomplished. Kind of. Hours before we made it back to Night City, while strapped into a cargo plane, I called The Bey and booked a modest room at the Ottoman for a week. I was sidetracked by Able’s reversion into a known terrorist of international infamy, and we had to get THAT taken care of, but we are used to that kind of stuff – we pulled a ton of resources to get that problem patched while we looked into his mysterious doctor. As soon as Lazarus business was wrapped up, I left a message for the crew Aquino Automations to give me 36 hours, then meet up at the Ottoman and catch me up on what I missed. It what was probably the longest, hottest shower of my life, I tried to soak, scrub and steam away thoughts of bits of code that thought they were deities and their plans to dominate the human race, carrying what was essentially the half-formed skeleton if a teammates clone through a robo-fac that was being bombarded with heavy weapons and power-armored goons from orbit, bullet-proof psychotic Texans, our corporate-owned comrade with the memory wipe has a history with our digital demigoddess, a lifetime of auto-accidents, places that served gnox *eggs*_, and finding out my best friend is a reprogrammable toaster. The shower didn’t put a dent in things, the sauna and jacuzzi weren’t much more help. The masseuse that was sent up to my room did her best, but wasn’t nearly as therapeutic as the hours I spent at the card tables – fleecing whales just enough to cover heavily tipping the servers, but not enough to wear out my welcome. Every stretch of relaxation was peppered with brief but inescapable ramifications of our mission (There are a pair of dueling AI “siblings” setting themselves up as demi-gods, and we left it mostly unresolved – uploading one into Mac’s new “sister” and bringing it back with us!), but I did my best to down them. Then sheets, glorious silken sheets in an actual bed. No lizards, no sand, no idling engines or trying to pretend I can’t hear what my teammates are doing in their sleeping bags, just pure luxury.

After a breakfast-in-bed of sublime actual food that didn’t require a bio-hazard warning, I broke down and started looking at the files I started on the trip back from Omaha. The way The Mac-bot and Seranya’s brains were wired was nothing short of revolutionary. Where as most AI (including my own bots on a much smaller scale) and standard skilldex wrote skills as complex information files, to be pulled and accessed as needed, the Mac-Brains stored them as artificial memories, written more like the the false memories used by intelligence services than those DreamCorp uses in Sims: the Mac-Brain doesn’t just store facts, it recollects anecdotes of fictional times learning the experience of doing things! Amazing. My first thought was to start to work on rebuilding my fleet, but the last thing I want is a buzz-bot that wants to listen to jazz or a harpy that “remembers” gunning people down, though the argument could be made that Pinbots would look awesome in jaunty-little mini-fedoras. 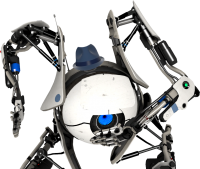 After a decadent lunch at one of the Ottoman’s many gourmet restaurants and a few relaxed laps in the pool, I was ready for a visit from my cousins. Aquino Automations had done while in my absence – too well. It was very carefully hidden, if I wasn’t the one who set the foundations of these books, I wouldn’t have noticed, but there it was hidden in the numbers – traces of laundering. After a few minutes of casting fuming glares while Manny explained the situation, I calmed – it wasn’t anything AA wasn’t doing while I was there, after all. A few gray-market sales of bots, mostly with the Imazighen, a bit of smuggling things through shipments for the Filipino Mafia, things like that – nothing big, and no-one got greedy on either side, it stayed hidden at less than 10% of AA’s dealings. It seems like more than just engineering was running through the family ~ thanks to my influence over my cousins, it seems shady dealings was a new family pastime.

Business concluded (books settled, contracts reviewed, parts ordered), I set a schedule for the rest of my time at the Ottoman: A daily check in at AA every morning, and 9 hours every day on researching the top-of-the-line skilldex and how the Macbrain could improve it, broken up by periods of luxury and poker, of course. Three days into the research, and it just clicked. Not only could I design a more efficient skilldex (and I already had the preliminary ideas for the memories – keep it simple and just piggyback them onto memories at the university), but build a military-grade reflex enhancer/tactical computer! After a week of wine & women, poker & posh living spicing my days, plus a few more of the inescapable reflections (Mac’s girlfriend is either a fembot based on the image of his “mother” sent to seduce, pacify and spy on him, or his “mother” read his memory files and chose to project herself in the image of his girlfriend in order to bolster his loyalty when reveling the truth to him – either situation being creepiness to an order of magnitude that only the Lazarus Crew could foster! Not to mention his sister is now his mother!), I was ready to get back to the workshop, with a shopping list of everything I needed to take things to the next level. Peppered into the obsessive nights of work, I managed to squeeze in a few visits on the recovering Wormwood and Able, the sad state of a second-story man getting new legs and battling his own personal demons and our corporate-owned terrorist that was a biological bomb – fun stuff.

The skilldex came easy, with some rented sim-editors, I was more than able to take my memories of college and expand my computer-science classes to include a memories of my professors teaching me tons of new information. Sure, some of the devices I was “learning” didn’t exist in my collage days, and Professor Hudnall would probably loose tenure for teaching some of these blatantly illegal methods of computer use, but hey, that’s how I’ll remember things once I get this baby installed! Another mission reflection reared up and had to be drowned in my work (I know what Mac’s junk looks like without skin… ::shudders::), but I moved on. The Combat Enhancer was a little trickier, hard to extrapolate my existing memories into military experience! With a eclectic mash-up of personal experience from my time in Lazarus, tips from Pitbull, snatches of information form The General’s AI, and scenes from various action sims, I’m pretty sure I got it down. I tried to keep the sim-clips on the safe side – light-yet-fairly-accurate scenes over the dark and gritty: the last thing I wanted was some artificially inserted post-traumatic psychosis! Pouring myself into my work, I had the programs and memories ready to upload, the hardware was a little more expensive than I was hoping – eating away most of my DreamCorp cash before I even started replenishing my lost bot-stock, but I think the end game was worth it – and it wasn’t like I had a ton of time for making bots under this workload, anyways.

The moment of truth: I had a well reputed doc install my first ever truly brain-altering neural modification, for better or worse, I was going to be permanently altered by this one. The Skilldex worked better than expected – with a little practice, I was nearly as good at cracking code as I was at building bots. It was amazing. Instead of a complied index of electronic skills, I had a lifetime of training and experience jolted into my subconscious. Before I even recovered from the surgery, I was an elite code-king, with years of experience! My “Instant Soldier” mod felt great – on the range, I had amazing situational aware I never experienced before, Augmented Reality was highlighting tactical advantages that blew my mind. The reflexes didn’t always kick in when I expected them, but I’m sure that is part of the lack of real adrenaline at the range – the reflexes not kicking in during a routine situation, or something easily tweaked like that. The last thing left to do is field test this amazing piece of work!

“After a breakfast-in-bed of sublime actual food that didn’t require a bio-hazard warning”
Love that!

Yeah, KV – I had to picture a guy that loves luxury living off cloned mutant cow eggs and lizard jerky for a few weeks!

You Only Live Twice