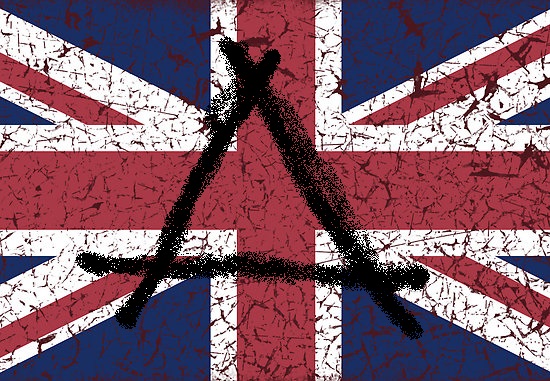 “This is Radio Clash, on pirate satellite…
This sound does not subscribe
To the international plan
In the psycho shadow of the white right hand
Then that see ghetto-ology as an urban Vietnam
Giving deadly exhibitions of murder by napalm”

The introductory music, an old anthem of rebellion from the last century, plays for a second then the screen fades from the logo – an old-style British flag with an anarchy symbol painted over it in black – to show a jovial Rastafarian host.

“This is your one-and-only Radio Clash calling civilization, beaming from an undisclosed location to the whole world tonight, and thank you to the righteous at 23Enigma for hacking UniComm!

Tonight we have a treat for you, citizens of the global New World Order! We have footage, obtained from our righteous brethren at Mutate And Survive, that proves the global hegemony is proceeding with plans to turn you all into slaves without any free will at all, policed by mutant soldiers. The footage you are about to see is explicit, contains scenes of violence, and is absolutely bloody amazing, mon!”

The scene cuts to a dim chamber, with bare metal walls. A middle-aged and worn-down looking man, which a caption describes as ‘Rossum Universal Industries Neurological Programming Expert, Dr. Luther Wahlen’ explains to an off-camera female voice that Rossom and Umbra Corporations have been co-operating on mind control techniques using Rossum Jannisary software running on Umbra implant biocomps. The whole project has been bankrolled, and ultimate command and control of the resulting slaves lies with, Hightower Universal Bank – the massive financial giant who owns more than half of all the corporate shares in the world and is based at Hightower Station in high orbit. The interview is interspersed with video obviously taken by Wahlen himself through a cyberoptic, showing experimental subjects being implanted, controlled, and ultimately dissected for analysis.

“That’s only the half of Babylon’s plot, brothers and sisters. The next footage was obtained at great risk, as you’ll see.”

Now the scene is again obviously shot with a cyberoptic or worn camera, as it jerks and moves. In a large chamber full of scientific equipment and computer screens. Every screen shows the same pixelated face, laughing, as a clear glass column in the middle of the room slides down into the floor to reveal a horror. The thing towers over the figures facing it, and is covered in thick hide through which plates and nodules of dark gray horn-like armor protrude. From it’s left arm projects a wicked curved bone blade, an axe with a shimmering rainbow edge. As the monstrosity moves forward, a hail of gunfire greets it. It falls, rises, then finally falls again only after having a hole chewed right through it bu automatic fire.

The image cuts back again to the anchorman.

“Brothers and Sisters of Babylon, you can thank the good people of Lazarus for detroying that monster, and who-knows how many hundreds of others when those heroes blew up the blasphemous lab they’d been created in. Yeah, mon, I said heroes! The Man wants to call those fine fellows ‘terrorists’ but we at Radio Clash know they are Freedom Fighters, true warriors in the cause.

Brothers ans Sisters, we are the poor and the downtrodden. We are the disenfranchised, the beaten, the ugly and unwanted dregs of the society the shining Glitterati have made for themselves! The elite may be willing to enslave themselves to a machine god, the Artificial Intelligence that controls the HUB and sits at the center of the corporate spider’s web – but we refuse to be enslaved twice!

Like Lucifer descending, we say unto that false God….”Non Serviam!”

You know what you got to do….

Another old rebel anthem begins to play as the transmission fades to static.