Night City. Returning to her felt like sneaking home to confront a jilted lover, the kind that had the sort of fire that would make a bishop kick through stained glass. From a distance she felt cold, lights screaming defiance at the dark surroundings, daring them to come closer. Approaching felt wrong, somehow – conflicting. It should have felt like I was coming home, but it felt more like running away. The town I grew up in was mostly a figment of someone else’s imagination, and that tore my sleeves something awful. This was my Elba, only there was nowhere else to escape to. The town kept dragging me back in. I just kept hoping it wouldn’t drag my pals down the path it was forcing me down. The goon, greaser, gunsel and gorilla deserved better than to get dragged into the gumshoe’s war that he was going to lose. As the transport jerked downwards, my brain and my lunch decided Newton’s laws ought to be fighting it’s way up. It’s times like this that I’m actually glad I’m not human. I don’t have have to deal with a physiological gag reflex.

The days after we got home had my mind wracked with guilt, grief and were mostly spent in a bit of an alcoholic haze. What had been done to Able was unconscionable – not only had they taken his mind away from him, they booby trapped it. Made my own problems feel small and petty in comparison – because they were. My brain wasn’t melting down, my Mother just happens to look like an exact replica of the girl I had been spending the rest of my life with. Except it’s not much of a life, given that my components will outlast hers by an uncountable number of years. The thought disturbed me to the composites of my bones, and I sought refuge in the bottom of several bottles of whiskey. Luckily, I had some company in Pitbull on some nights, although more than a few with the crew made the whiskey bottle start to seem a bit crowded. Some nights I would find myself stepping off the transport, across the street from Anita’s place, cloaked only in shadow and misery. The rain generators were still working, at least, and it helped wash away whatever organo-compound my eyes emitted when I found myself crying. I couldn’t face her, not like this. After a full week of torturing myself, I retreated to the only thing that’s ever really taken my mind off of things.

My eyes opened and for a second I was convinced I was dead. I found myself staring at a luminous menagerie of light and felt myself being pulled upwards before I found myself blinking as a thought crossed my mind. 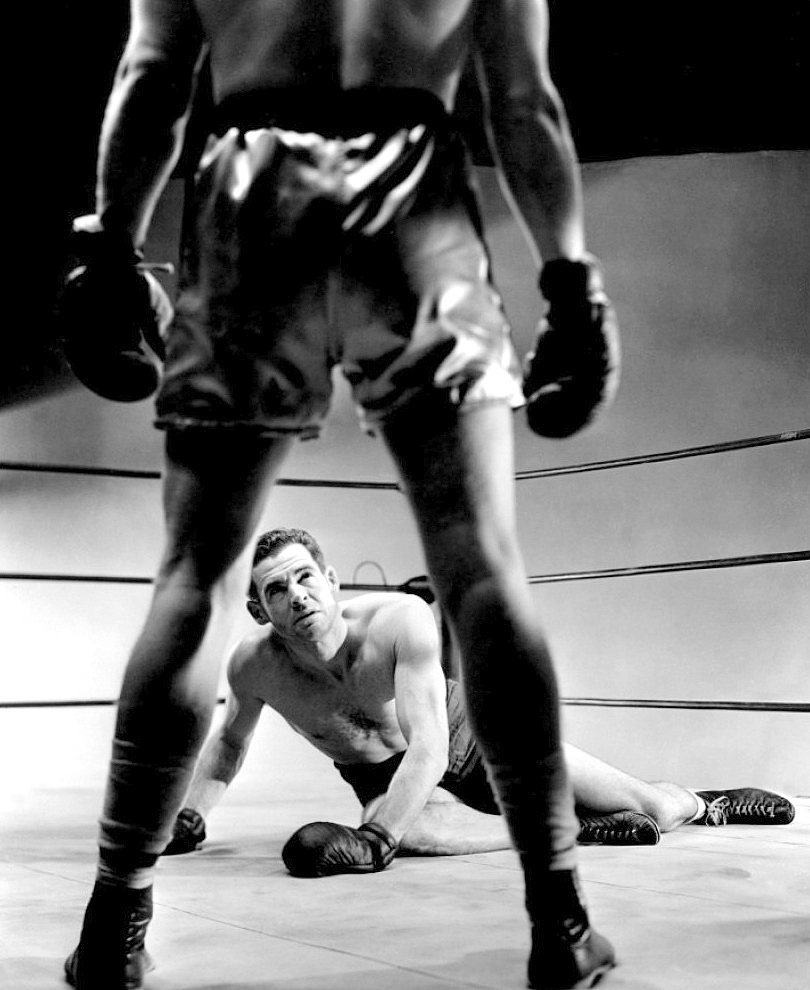 You’re not human, Mac. Never have been. There’s no soul to ascend when you’re dead, so get up! Get up and keep fighting! The thoughts rattled around my head, having been shaken loose by a mean right cross that I hadn’t seen coming. I had been distracted, glanced off to another ring to see how Pitbull was holding up in his bout. Thought I was fast enough – got cocky, then got clocked. I took my partner’s hand and got up off the mat, shook my head and motioned I was ready – I wasn’t, mentally, but in the amount of time it took for him to get his guard up, I had seen Pitbull knock his opponent out in my mind’s eye and found a smile crossing my face as I began to move. He came at me with his hands up, each one the size of a plate of spare ribs, and about as greasy. We bobbed and weaved, and I hit him more than he likely expected – mostly with my face, but his hand had to have started hurting after a while. After a particularly rough bout of blocking his fist with my face I heard Pitbull’s throaty chuckle from the ringside – just enough to steal my attention away from the monster’s right cross. Moments later I was looking into the light until Pitbull’s ugly mug crept into my field of view, offering a hand to help me up. The fight might not have cleared my head, but at least it gave my friend a chuckle.

Able’s condition was wearing on my mind as I wandered over to the coffee machine, glancing back at Siri lounging in my office. Gladys had revolted when I asked her to order up a new chair for my sister – it was like a sea of never-ending battles these days. Maybe she was jealous, maybe she could tell something about Siri – I don’t know, and I never bothered to find out. I found myself grinning as I looked for the datajack on the coffee machine. Not that long ago, my little sis had been left for dead in a roadside ambush, and now here she is, relaxing in a leather armchair, poking about at my workstation, shuffling through the paper mess that has clogged up the office since I started working out of the hangar more than my old place. As I plugged myself into the machine I sighed – it would be easier to get better coffee by bringing my french press from the old office, but there was something comforting about the routine. I let my mind slip into a digital unconsciousness as I sent gentle streams of thought into the Lil’ Brewer, overriding it’s default settings in subtle and nuanced ways – half a degree less of heat, microsecond pulses of grinding the NuBeans. Most of the guys thought it a bit overkill, but as I withdrew my consciousness along with the jack, they couldn’t argue with the results – I could coax the best mug of joe from that brewer this side of the planet. As I let the smell of the two cups drift up to my olfactory sensors, I gingerly made my way back to my desk – artificial skin or not, hot coffee still burns like a pan of bacon fat. Siri had engrossed herself in one of my old paperbacks while one of the latest articles they pulled coaxed it’s way through multiple rerouted servers and hotspots, taking ages to load. I set her mug down as I sank back into my own chair, savoring each sip of the coffee as it reached it’s optimal temperature. As he read through the latest article, eyes scanning text as fast as it was appearing, he gave voice to the primary concern that had been eating away at his core since their trip to Omaha. “Sis, when Mother was projecting that image… of Anita.. was that what she looked like? Is Anita… like us? Was she a construct sent away to find me?” Siri’s laugh was as genuine as anything – she seemed more human the longer she spent with the team. She gently explained to me, in no uncertain terms, that the image Mother projected was meant to foster trust and comfort. Understandable, I suppose, but certainly unsettling. At least now I can look my moll in the eye again without feeling critters crawl up and down my spine like cars on the freeway. I pulled her close and ruffled her hair. “Thanks, sis. I needed to hear that. Now there’s got to be a connection in these articles… got to be something about Able…” She leaned her head against my shoulder. “Thanks for not mentioning me and Mother to the Candyman friend just yet, brother. I know he is an ally of the remnants of Mother’s network, perhaps even a member of that network by now, but I need some time to get used to how big and wide and empty but full my head feels.” I reached up absently and patted her cheek, “Don’t worry your gorgeous mop about it, Sis. take all the time you need. Now hush, I think I can…”

The week before we left for England was a rough one. I had to make some tough choices – though the magnitude between them varied wildly. I treated myself to a handful of new-used paperbacks for the trip over, because long trips have always felt unsettling to me. Longest one I’ll be taking by far – the others will be able to sleep, but that’s not as much of an option for me. My outfit – no change needed there, aside from getting the radiation scrubbed from it, which was easier said than done. At least I’ll be prepared for rain – it’s always raining in England in the old reels. When I checked the local regulations, I could almost hear Pitbull swearing in my head – tight restriction on all firearms. Less of an issue for me, as I’ve tended to avoid violence when possible, but for him it’ll be like learning to walk all over again. Terrifying. Me? I had nothing to be afraid of over there. My fears were all in Night City. And when I found myself outside Anita’s place three days before we left, I was scared. Real scared. So scared I could taste it. I had put it off long enough. She deserved to know. And with me leaving for England in few days, I couldn’t put it off any longer. I knocked, and for a few minutes there was nothing. Just as I was turning to go, her door opened, spilling warm light into the street like a puddle of gold. My heart melted. We went inside and talked. For a while. She cried, a lot. What I did wasn’t right, but I had to – That’s what I tell myself anyway. Wasn’t fair to let her worry like that. I could have called. Maybe it would have made it better. Maybe not. I’m not perfect… I’m only human. Hah. We talked late into the early morning. I told her everything. I had to. Once I started it was like pulling the bung from a keg. She cried more, didn’t believe me, at first. Images I had lifted from Pacoy’s HUD backed my story. The look she gave me… hurt more than that wound did. Not sure if she’ll forgive me for this, but I couldn’t very well lie to her. The words we parted with weren’t harsh, but they were about as tender as a gnox steak. She needs time to deal with it. Hell, I can’t begrudge her that. I needed time to deal with it too. The best that I can hope for is that she’ll be here when I get back. And that I get back.

by: RaseCidraen
See All Pages