If you have one of these, you probably built it yourself, and it probably has small customized details to set it apart it from all the other Nomad cycles. After all, how can you respect a rider who can’t build and maintain their own ride? Some Nomad packs even make building your own cycle a “coming of age” ritual.

The alcohol-burning engine and the (optional) computerized control system was probably traded for with city merchants at a Nomad Gathering, but the rest was put together by the you and your buddies from the scrap parts of countless wrecks left over from the Collapse.

Your Roughrider has a simple cable-jack interface, if it has one at all, and absolutely none of the standard comforts a mass produced vehicle would have – and none of the safety features either. It has lights so you can drive in the dark, a radio so they can contact the Pack, and maybe a little bit of nanoweave glued to light metal panels as armor – that’s about it.

The price noted above is for comparison only – no-one ever paid actual money for a Roughrider. 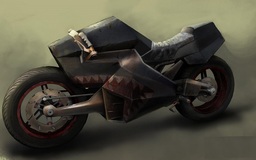