This is the standard utility van small AV often seen in the skies of major cities, a streamlined vehicle which flies using thrust from four pod-mounted ducted jets and which can hover in mid-air, take off and land vertically, or fly as fast as a light airplane with a range of 600 miles. It’s engines usually burn enhanced biofuel or ethanol.

The vehicle has three doors and six seats as well as a reasonable cargo area. The four rearmost seats can be removed or folded flat to provide an additional 0.4 tons of cargo capacity. It is operated with Piloting (Vertol) and Electronics Operation (Sensors); Navigation (Air) is also useful. Most “AV’s”, as they are called, are flown using an interface connection to the onboard computer system although they can be flown without interfacing if needed.

NOTE: The Vertol air car or “A.V.” used in Edgerunners has a couple of key differences from the one described on Ultra-Tech p225. It has no ground movement capability at all and no emergency parachute system. the vehicle is best described as a flying brick kept aloft by powerful jet turbines and sophisticated fly-by-wire avionics. It cannot continue to fly if even one engine is disabled, but will then descend in a controlled emergency landing on the strength of it’s remaining engines. If the fly-by-wire systems fail, it becomes a non-flying brick. 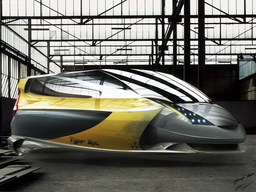