The D-K Amur is one of the most popular SUV’s in the world, found everywhere people really have to go off-road into the wilds for extended distances. It’s a simple but rugged vehicle, with only the barest of equipment to suit it to its role. it has four-wheel drive and steering, is lightly armored, and is built to be easily maintained. The powerplant is a lean-burning, alcohol combustion engine which can use either ethanol or methanol and uses a 35 gallon tank (300 lbs) of fuel for the full stated range above.

The Amur comes equipped with a computerized crew station (UT p. 24), an inertial navigation system (p. 74), a hyperspectral surveillance camera, a rugged personal computer (UT p. 22), a large radio (UT p. 50), and an entertainment console (UT p. 51). Each occupant has a crashweb (UT p. 224). The van has a biometric lock (UT p. 104) on its doors, and the vehicle is also equipped with headlights and tail lights.

The Amur can hold up to 7 people, or 200 lbs of internal cargo per seat removed. It also has a roof rack supported by reinforced frame pillars that can hold up to 1 ton of cargo externally. 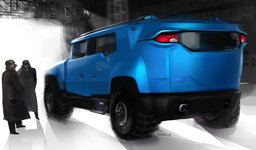