A common corporate and military transport

The most common light AV squad-level transport craft for both corporate and military units, this is a streamlined vehicle like a wingless cargo jet, with a tail assembly, four pods containing vectored-thrust ducted fan engines, and a retractable skid undercarriage. It is flown using Piloting (Vertol) skill but Electronics Operation (Communications and Sensors) and Navigation (Air) are also useful for either pilot or co-pilot. Expect to see AV4’s everywhere in the skies of 2050, in hundreds of different corporate liveries.

The standard AV4 is lightly armored, but its redundant systems enable it to fly despite systems failures or combat damage. It has a front cockpit with two crew seats for a pilot and a co-pilot; behind that is a small cabin with eight passenger seats and a cargo bay. There are doors on either side of the fuselage, and two under the tail. All seats are provided with crashwebs (UT p. 224). Electronics include a pair of computerized crew stations (UT p. 24), an inertial navigation system (UT p. 74), a medium multi-mode radar (UT p. 65), a medium radio (UT p. 44), two personal computers (UT p. 22), and a large radar (UT p. 65). Many models in both military and corporate service have additional defense and weapons systems. It has a sealed hull with an NBC kit (UT p. 224). 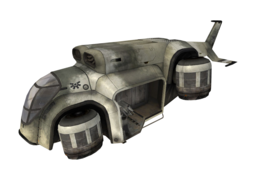