The massive Air-Walrus is a HULA (Hybrid Ultra-Light Aircraft) craft which gets its lift from a combination of helium gas, lifting-body design, vectored thrust and small wings. It’s skin is a nanoweave armored fabric covered in mylar and then an outer coat of photovoltaic cells. It’s frame is of spun aluminum and carbon fiber. The silent electric engines run four propellers effectively indefinitely while the lifting gas is helium contained in a modular cell system of mylar which is surprisingly resistant to damage. It is flown using Piloting (Lighter-Than-Air) skill but Airshipman, Electronics Operation (Communications and Sensors) and Navigation (Air) are also useful.

An Air-Walrus is the pride and joy of any modern airship fleet, capable of carrying up to 100 passengers for extended periods as well as toting a 150 ton payload.

Electronics include a pair of computerized crew stations (UT p. 24), an inertial navigation system (UT p. 74), a medium multi-mode radar (UT p. 65), a medium radio (UT p. 44), two personal computers (UT p. 22), and a large radar (UT p. 65). Many models in both military and corporate service have additional defense and weapons systems. It has a sealed hull with an NBC kit (UT p. 224). 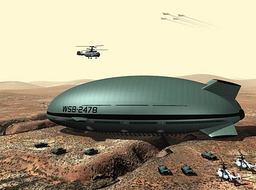