Valerie Oldridge had spent her entire life as a bright, privileged rich-kid, but her innocence came to an end three days after her 16th birthday when two schoolmates walked into her private Tri-Cities school with automatic weapons and opened fire. Valerie herself was wounded and 16 schoolmates were gunned down before the school security team neutralized the threat. She still wakes up screaming from nightmares about the event at least once a week. Her parents decided to move to their Night City lodgings for her last year of High School and so that she could study her MBA at NCU. In their first few months living in the city she and her sister, a talented musician and dancer even at the age of 17, were adopted as associate members by the Ruskin Commonwealth Society. her sister lives in Mornington still, and is a performer at the Waterford Auditorium. Although Valerie long-since moved out to her own Umbra-sponsored residence she keeps to the Victoriana clade’s dress and customs.

It wasn’t until the middle of her second year at NCU that Valerie cracked up. Study pressures, performance anxiety and her earlier schooldays trauma combined to send her into a nervous breakdown. She spent a month in intensive VR-immersion therapy at an Umbra research arcology in Hawaii before returning to school, only now her previously flighty and bitchy personality had changed to ice-cold and ice-bitch. That new persona earned Valerie a summer internship the following year at Umbra’s Night City offices, working for Danny Tromello, the Assistant VP for Human Resources. During a time-and-motion study she identified ways to cost cut three departments, leading to 65 people losing their jobs and the NC office showing a 7% increase in operating profit. Tromello still owes her a favor for that.

Valerie graduated 12th in her class in 2015, aged 21. She would have been twentieth but she received 10 extra points in her finals as a reward when she exposed one of the brightest students in her year, Alicia Morgan, as a cheat who was using an illegal cyber audio rig to get answers from an accomplice beamed direct to her visual display. Alicia lost everything – possible job, friends, prospects – and is now believed penniless and homeless somewhere in the Night City Combat Zones. If she survives, she’d doubtless try to kill Valerie if they met.

She joined Umbra (of course) right after graduation, working in the Night City offices as a project manager. Over the years her work for Umbra’s R&D programs included her prompt action in releasing Umbra’s pre-patent vaccine for a virulent algae-rot virus – thus heading off massive starvation in Night City’s poorest areas while making Umbra both popular and richer. But Valerie, now with the nickname “Icefire” also made some enemies.. She entered into an affair with her own boss, Vice President Yoshi Hamakuri. When she turned on Yoshi and exposed his skimming funds from the PR budget into his own private Bermudan bank account, her lover committed ritual suicide in his own office. Now, aged 56 but definitely not looking it, she’s the V-P in the Night City offices and on her way to a seat on Umbra’s board. 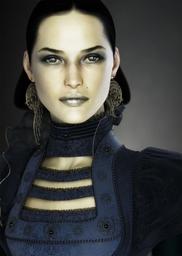