They call her "Stepping Razor"

Based in The Sprawl but wealthy enough to enjoy a nearly Glitterati-style life of travel, Trudi Barnett is “The Edgerunners’ Edgerunner”, a veteran of countless missions across the globe who earned the name “Stepping Razor” from her allies when she and a small team of companions took a contract from a group of Jamaican eco-nomads to stop S.E.M.C., who were trying to run everyone out of an area where they planned a shallow-water mining project which would have left toxic heavy metal residues throughout the Caribbean. During the campaign, documented by the nomad group and released on pirate stations in the US, Barnett led a small team of eco-nomads in an assault on the SEMC mining barge, which was protected by heavily armed guards and a pair of gunboats. Despite a victory that saw SEMC’s barge at the bottom of the ocean, Trudi suffered grevious wounds and rampant infection which almost killed her and would have left her quadreplegic and comatose. An online donation drive backed by hacker syndicates and fringe media outlets across Noth America raised the money for a pioneering set of procedures which gave Trudi – or at least her salvageable brain and part of her spinal column – a custom-built Orly Industries cyborg chassis which mimicked her original appearance. Since then, she has gone on to fame and fortune, as well as many other adventures, at least two of which became the subject of holo-movies. She’s even the star of her own VR-game, although she’s never received a dime of royalties from DreamCorps for it. Still, she keeps working on the Edge, her cyborg body keeping her in the Edgerunner game long after she should have been too old. She still refuses to take a corporate contract, preferring to work for the little people, the underdogs and fringe groups against the predations of megacorps and governments alike. The powers that be dislike her intensely – various corps and government agencies routinely try to discredit, embarass or just kill her – and she mostly hates them. She’s a living legend, especially among Edgerunners themselves. 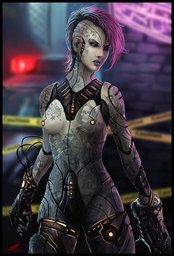