Tabitha and Eli are the twin offspring of Spencer and Dao-Ming Jaegger, both of whom were security guards with Whirlwind’s Chi-Pitts operation. The twins followed their parents into Whirlwind service and rose to be members of the megacorp’s Personnel Security division, contracted out as bodyguards to V.I.P.s who hired the company’s services.

In time, the twins tried to go freelance, but found contracts as independents tougher to come by. They drifted into bounty hunting – the grey area where bail jumpers and those with a corporate price on their heads are pursued across state and even international boundaries by people who may be just as criminal in their actions as those they pursue. The last anyone heard of them was six months ago – they told a well-connected fixer friend they’d uncovered a lead on the whereabouts of someone a major megacorp had been seeking for a long time, and were taking the first dirigible to the West Coast to follow it up.

They soon showed up again, but as members of the very group they had gone hunting. Captured during the group’s attack on the Ottoman Hotel, they were later released from the custody of the Desiderium cartel. Their current whereabouts are unknown.

The twins are professionally trained, although not quite to military standards, and have been extensively augmented over the years. They work well together as a team. Tabitha is quicker to anger, but Eli is marginally more apt to hold a grudge. 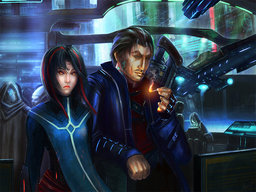