Snow (Meixiang Chiang) was the first child of a low level Chinese Warlord, near the border of India. Disappointed that his first born wasnt a son, he placed an assault rifle in her hands as soon as he could, hoping she would die quickly in one of the frequent cross border raids. Her inborn quickness and alertness, apparent at an early age, served her well though. Her father blindly raged as members of his militia grew to trust in her leadership and combat abilities. Her developing beauty and natural charisma ensure that more than a few of his attempts at “accidents” met with failure.

Her father was a prolific, if unsuccessful gambler. 2 years shy of her 16th birthday, Snow was pulled from her cot and clubbed to unconscious ness. When she woke a powdered and perfumed elderly Chinese woman told her that her father had sold her to a Triad boss, known as Wuping, to pay for his extensive debts. Madame Shen told her that she should feel great pride, in that her beauty and youth had earned her father a tidy sum.

The next 5 years were a blur to Snow, as she withdrew into a dreamlike state, trying to hold onto her sanity as she was pressed into service as a courtesan in Hong Kong. She faked submissiveness, slowly earning the trust of Wuping and his servants, allowing her to find and conceal a small handgun. Her last client was Wupings youngest son. While he lay on her bed in a drug and sex induced stupor, she shot him in the genitals and made her escape in the ensuing turmoil.

She managed to find passage with a poor immigrant family, traveling to Night City, to escape the turmoil of the East.

In Night City, her exotic looks, and skills quickly earned her a tidy sum, allowing her to move off the streets into a semblance of luxury. Over the past several years, she has earned a reputation as an “off the books troubleshooter”. Her clients are frequently MegaCorps and the Elite, who don’t want to use their own assets, for fear of being tied to the wrong activities. 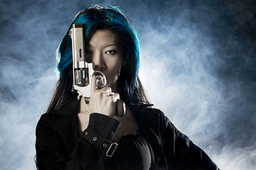