Tony is one of the senior figures in the London underworld, running his criminal enterprises from somewhere in the flooded mazes of Lambeth. His well-manicured fingers extend into smuggling, extortion, drugs, prostitution, illegal arms sales and more. He’s known to keep a small string of corrupt or blackmailed minor functionaries from the ruling Junta on his string too. Oddly, he’s also a staunchly monarchist patriot, and has ties to resistance groups who hold their noses while dealing with him.

He’s not a stupid man, although fairly uneducated, quick to anger and never one to turn the other cheek. Bright enough to allow his underlings the use of their initiative, even so he is unforgiving of stupidity that costs him money – or worse, prestige and respect. Dealing with Tony is like dealing with his namesake – you’re always aware that at any moment you might make a wrong move and he will turn to devour you. 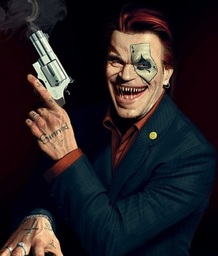