Robyn is the fresh and gorgeous face of News 24/7’s “Movers and Shakers” program, an interactive netcast that deals with breaking news and gossip, as well as in-depth investigative journalism, centered around events and personalities in Night City. Robyn came to the station when her father, Frank Curia, was aggresively head-hunted from the netzine StreetNews, where he’d been editor, to head up UCN’s news station in the city.

Robyn quickly established herself as hologenic, streetsmart and perceptive and became a ratings favorite, challenging DreamCorp’s “Edge Media Network News” for top position. With her father’s guidance, she’s also established a core team of excellent journalists and crew behind her, including renowned reporter Veracity Blaize. The show broadcasts from the News 24/7 studios on the fourth floor of UCN Tower in Core Night City.

Robyn’s crew seem to love working for her – she’s selected for excellence not the ability to brown-nose, and seems to have learned her father’s trick of herding a bunch of cats with high opinions of themselves. Her easy manner and an ability to make the tough decisions without thought for her own fame have helped bond the Movers & Shakers crew into a team. Her one known vice is shopping – for which she’s twice had interventional therapy. 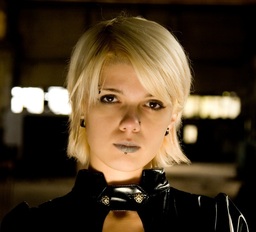