Raymond is a known freelance hacker on the Night City circuit, who lives in Peach Trees hab-block in the Pacheco district, not far from Hartnell General. He is suspected of belonging to the 23enigma terrorist group.

Raymond might have had a far brighter future if he’d been born into the right class – he’s a brilliant young man, amazing on computers of all kinds – but his mother and father were Doles, working at manual labor when they could and petty crime when they had to. Raymond attended the Rick Warren High School in Pacheco and “inherited” his parent’s apartment when they both died in a freak smart-car accident on the Night City Freeway four years ago. He’s survived by doing credit-card and phone hacks for local gangs, along with the occasional bigger run as the Netman for some minor Edgerunners. A year ago, he dropped off the Net entirely, his last communications on the “Hiro’s Protagonist” hacker Netsite suggesting that he’d found a big score or someone to bankroll some new coding experiments. However, he has still kept on the apartment in Peach Trees, all bills paid six months in advance.

Raymond’s High School profiled him as a genius with Asperger’s, not good at relating to others and with a generalized anger at the world because of his poor chances in life. He is now 22. 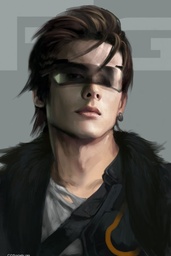