Professor Gregori began his career with the Russian megacorps Dynamika, where he worked in cybernetic research for many years. From there, he moved to Umbra, after the bioware giant aquired him in a hostile extraction from the Dynamika facillity in Astana, Khazakstan – an operation which cost half the extraction team during the assaultand left Gregori himself paralyzed from the neck down when a Loyalty Bomb in his spine exploded as he got more than 3 kilometers from the facility.

Unfortunately, there were problems with compatibility between the Umbra augments which it was hoped would restored his movement and the Dynamika ware he already possessed. Gregori was still a brilliant scientist and engineer but he became erratic – by turns paranoid and megalomaniac but always bad tempered. While in the Umbra medical facility in Geneva for further treatment two years later, he removed the limiters Umbra had installed on his exoskeletal implant then reprogrammed several nursing and maintenance droids to attack Umbra’s guards and aid his escape. He was last positively located seven years ago fleeing the Umbra facility in a stolen air-ambulance which later turned up in the Combat Zone which wraps around the Northern housing projects of Marseille.

Since then, Gregori has been rumored to be in Cairo, Mumbai, The Sprawl and Brazilia at various times, always reportedly involved in criminal conspiracies against various corporations and always staying ahead of law enforcement as well as Umbra’s hitmen. For the last two years he has been rumored to be a member of the 23Enigma terror group, and may have masterminded attacks on corporation facilities in Canada and Cascade Free State. It is likely he has further augmented himself and may have become even more unstable. He remains on Umbra’s list of Most Wanted, with a reward for his confirmed death or capture posted of $50,000. 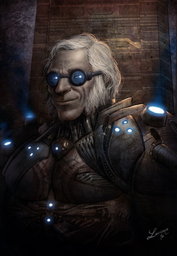