A heavily muscled, heavily cybered man of mixed ethnicity and a trademarked beard smoking on a large cigar.

Mr. Choppa has become a household name for his role as the muscle bound “heavy” sidekick in a number of Sensies and Braindance games, using his goofy grin and trademarked mix of Dirty-South Drawl and crazed ebonic phrases. It would surprise most of his fans (as well as his critics) to learn that Mr. Choppa (born Craig Ayvaz), despite being born in on the edge of one of the toughest Combat Zones in the Atlanta area, went to a charted corporate high school for geniuses, and has a perfect photographic memory! Before his raise to Sensie-Sidekick fame, Ayvaz was a remarkable college athlete and spent a few sessions as a professional fighter in several different sports-fighting leagues before going on to being a very well paid bodyguard. It was during his time as the personal bodyguard to the insanely wealthy and eccentric Bahraini prince-in-exile, Jassim bin Thani Al Khalifa (whom rumors say has strong ties to Night City’s own Freelander Bey), that Ayvaz became interested in Sensies. Despite his intellect and combat training, “Mr. Choppa” loves his image as the goofey, dumb muscle-bound goon he is known for. 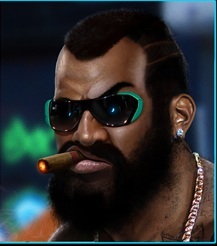