Tall and Slim, MC S-Sure is easily recognized by his retro fashion sense and iconic afro hairstyle, and he is rarely seen without his age-stunted/cyberlinked pet chimp Josephus.

The meteoric raise of music legend MC S-Sure is one of Night City’s most famous Rags-to-Riches stories: At age 15, Steven Shirley was a fledgling net-runner known for his mathematical brilliance and wildly flamboyant creativity, he spent most of the money he got a hold of on musical equipment and self-promotion. By age 18, under the tongue-in-cheek stage name MC E-Sure, Shirley had landed a studio contract as one of the pioneers of the Transambient music genre. Twenty years later, MC S-Sure is one of the most influential artists alive – he is one of the few geniuses able to keep his art constantly evolving, while at the same time staying true to the core. Although his live performances don’t have the same Transambient affections as one of his Skips, MC S-Sure is known to put on epic live shows for special events. 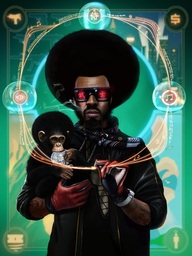