Madeleine is originally from the Atlanta, Georgia sector of The Sprawl, the massive conurbation that makes up almost a third of the rump USA’s population. Her parents were dolers, but Madeleine seems to have decided a life of crime was her best way to rise above that station in life. By age 16, she had been arrested for petty offenses twice and spent most of a year of her life in local prisons. By age 19 she was arrested on federal charges of smuggling and Type B trafficking, found guilty and sent for compulsory neural reprogramming. Somehow, she escaped from the truck taking her from court to the holding cell where she was to await treatment – bribery of the guards involved was suspected but never proven – and she fled the USA to NorCal Free State.

Once in Night City, and now habitually using her street nickname “Ragdoll”, she immersed herself in the flow of street level grey and black market dealing, making a steady living and a growing reputation as an independent “fixer”. Eight years ago, she moved into the Gomi Emporium and became Lady Emily’s aide (and perhaps de facto heir). She is now aged approximately 30. 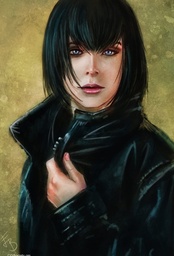