Born a little person in an impoverished and war torn land of southern United States; his war raped mother sold him to small time slavers. His life as a child is what would be considered sick and horrifying to normal people, but it was all he knew. Being sold into the sex trade at a young age and rented out to wealthy patrons with strange fetishes was his life, until…

Late 2041, the Liberación Del Pueblo raided a known compound of the Los Zetas to steal arms and equipment only to find out the facility was being used for sex trafficking. The Liberación Del Pueblo, not knowing what to do with most of the victims, offered shelter and assistance to those rescued. There were many children without an identity because of their lack of an official past. Many of the older children and teens chose to pick up arms and asset with the resistance, feeling indebted to their saviors. Feeling the same way, the dwarf wasn’t taken seriously at first because of his stature; but that all changed when it was realized he had a natural proficiency for killing.

It wasn’t too long after the rescue that a local Los Zetas task force was sent to retaliate and recover its investments. The firefight that ensued wasn’t looking good for the Liberación Del Pueblo. Over half the small group of forces currently stationed at the compound where the refugees were being kept had fallen. Some of the refugees decided to take up arms in this fight. Still not being taken seriously, the dwarf wasn’t given any firearms. It wasn’t until the Los Zetas task force reached the inside of the compound and the refugees were forced to start to fight for themselves that the dwarf got his hands on a firearm. In a fit of rage and frustration to his former captors, the dwarf was able to pick up 2 pistols off a fallen refugee and began taking down members of the Los Zetas task force with ease and accuracy. Being a small target and very quick made the dwarf a hard target to hit. The dwarfs quick action and natural talent for killing ended up saving the remainder of the refugees and a few Liberación Del Pueblo. This newly discovered talent was something the revolutionaries were sure to put to use in the coming years of his life.

Now having new purpose and eventually being seen as someone that is dependable in a fire fight, he was respected among the revolutionaries. He was finally seen as more than just some sexual tool. He developed a sense of camaraderie for those he fought with and earned the moniker “Agent 00”. He was given this title because he seen as an action hero like the fictional super spy James Bond 007 to the local Liberación Del Pueblo.

Agent 00 expressed concerns to the local leader of the Liberación Del Pueblo, Manuel Franco, in regards to the retaliation of the Los Zetas and wanted to pay the rebellion by both taking down the local group and securing their cache of supplies. Manuel Franco at first rejected the idea, because their local forces already suffered heavily from trying to steal from the cartel and didn’t want to suffer any more losses. 00 asked if he could investigate the compound himself and at lease gather Intel and maybe provide a means to make the local Texas military do most of the work for them.

Upon investigating the compound as a child undercover with a group of nomads passing by the area and scoring some drugs, 00 was able to pick up enough Intel and information on structure and set up of the guards at the compound. He took pictures of this with a small hidden camera and gained information to communicate interest in purchasing drugs.

Once he returned to the camp where Manuel Franco was located, he communicated this information and his plan to have both of their enemies fight each other. He would provide false Intel to the local Texas military about the Los Zetas plotting to use stored biological weapons to kill everyone in a local and steal all their arms and equipment and sell it on the black market. He said he will say he heard this information because he is a nomad and didn’t want to see the loss of innocent life. If they questioned the validity of this information and how he obtained it, he would tell them one of the dealers was bragging about it in a narcotic stupor. Even so much to reveal their interest in selling some of the bio weapons to their caravan so they could pawn it off for profit. 00 also said he would use the death of his family by the same people as his prime reason for telling this to the officials he speaks with. Their deaths would have been caused by sour negotiations with the Los Zetas.

OO approached the local Texas officials with his information and presented a compelling argument with the pictures and information he obtained. Making it clear that their operations at that compound were now geared towards making a profit off of the deaths of a local Texas military armory, he produced the falsified plans and Intel created with the assistance of the Liberación Del Pueblo intelligence team.

Once the Texas officials sent a small strike force there to begin harassing the Los Zetas and demand inspection of their facilities, the Liberación Del Pueblo rebels caused a firefight between the 2 groups by having one of their snipers fire upon one Texas squads. Thankfully the force sent by the Texas government was small and sent there as an inspection team without the expectation of a firefight. As such they were forced to retreat but not before causing heavy casualties for the Los Zetas.

Once the Texas military ad fully retreated, the Liberación Del Pueblo took this opportunity to move against the Los Zetas. The operation was met with few casualties on the Liberación Del Pueblo end because of the havoc already caused by the encounter the cartel had less than an hour ago. The rebels were able to sweep the compound and claim all resources and weapons for themselves, making sure to destroy all evidence of their presence and making sure that anything that was left behind looked like it was the Texas military.

This small victory is one of the prime occurrences that cause a large war between the Texas military and the cartels. It is something that really pushed their hand in joining in the COIN operation with the official Mexican government.

Having recovered a fresh stockpile of weapons and resources with the assistance of 00, the Liberación Del Pueblo had a big start in their long fight for freedom against the Texas military and successfully shifted the attention of the Los Zetas away from them.

In the years to come Agent 00 would continue to engage in covert operations against the Texas military, gathering Intel and assisting in hits on their supply lines. In this time anyone he would call a close friend would end up dying in the fighting. This ended up happening so many times that 00 started to lose faith in what the Liberación Del Pueblo were fighting for. He wanted to get away from this life and find something where he didn’t need to survive in the desert living day to day in a war zone.

On occasion the Liberación Del Pueblo would conduct trade with passing nomads. During one of these times, 00 ended up talking with some of the nomads about porno made in the big cities and how much money the actors made there. Even though the idea of being involved in the sex business wasn’t appealing to him, the idea of dying for a lost cause was far worse. Plus he would be in the business on his terms and making a positive life for himself without needing to kill others. He knew this meant abandoning the life he lived, but he didn’t feel much attachment to the people he was fighting with anymore. He understood their cause but it wasn’t his cause any longer. He was starting to just feel like a tool to fulfil other desires again. He wanted more, he wanted to fulfil his own desires. He wanted to live an easier life. So he took a chance and journeyed to where the nomad had given him his lead, Chicago.

Agent 00 ended up secretly leaving with the Nomads, offering to work as a caravan guard and to pull his weight where needed. During his journey with the nomads, he learned their way of life and the caravan he left with ended up being glad that they had him join on more than one time on their journey back to the West Coast. There was more than one time where he was able to turn bandit raids in to nothing more than a small nuisance with his well-honed combat abilities.

Reaching the border of Night City was only the first step; the nomads introduced him to a lead for employment in the profession he had originally sought. The “employer” informed 00 he would need to receive some cybernetic implants to be of any use to him. During his travels with the nomads he was able to make some money and used that to receive the installation of a GenTech “Starcast” Wireless Braintap. Showing a willingness to get the operation done without much question and showing great talent on the job quickly earned him small fame in the industry. Knowing that moving on in this life meant also having an official name in society and not having one to begin with, he was registered under the name Hank Diggler. A corny and obviously porn related name but it ended up being the title to what Hank now felt was the start of a new life; a life where he had control and where he no longer needed to live in fear every day, huddled in broken and ravaged shelters that he was forced to live in when he was with the Liberación Del Pueblo. Hank was given a couple of years of the high life, not being used to living the high life he ended up wasting most of the money he earned on parties with the local “Glitterati”. When his fame started to fade, he started to find himself in a situation where he needed to find another way to make more money.

Hank always had an eye for that edgerunners show. He knew it was just a glorification hard and bloody life. Right now it was also looking like an easy way to make some money.

Hank took another chance. He took a good chunk of the money he had left and invested it back into him self. If he was going to compete against the group of edgerunners in the world, he knew he would need more tech, more cyberware. He was able to get top of the line and specially modified Cyberoptics and Speedware. 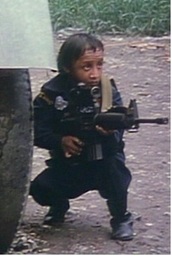