A security specialist on the run, with a big vendetta.

Three mags for weapon above and 132 rounds. Recorded

Garrion gave up the stressful life of a police detective to be head of security for a large biotech corporation. He thought this was a good move – less danger, better working conditions, and a substantial pay increase. If everything had gone as planned he could have retired early, but things did not go as planned.

Everything was going well at first. The occasional security breach, patches in security software and electronics systems, and training all the personnel in proper protocol. It all started with an attack on one of the biotech research facilities. Some data was stolen and he was tasked with its recovery. The perpetrators were not some small time thugs. They had some serious resources backing them and the operation led deeper into an underground network of individuals claiming to work for the common people. They threatened to expose research projects ruining millions in investments. The corporate heads were furious and pushed for a quick resolution at any cost.

Garrion led the investigation and directed the corporate security teams under the orders of the Director. The Director fed a little information to him at points in the investigation. Garrion always sensed that some information was being withheld, but when pressed the Director would claim “need to know” for investor privacy. As head of security he didn’t like not being given “clearance” for all the necessary information. He did as directed though for surely this large biocorporation was in the right; look at all they had done to help out society – how wrong he ended up being.

Garrion dug a little too deep due to his own curiosity. Had he followed orders he would never have come across the truth, as he is sure was the intention of the Director. Come to find out the stolen data involved unethical practices of the corporation and plans to embed hidden properties in cyberware. The details of these embedded properties had a broad scope and would enable the corporation massive control over the people.

The Director must have sensed his reservations or detected his discovery somehow. As soon as he radioed in its recovery – before he could even make a choice about what to do with this information – the building was wracked with explosions and collapsed. The media reported the tragic accident and lack of survivors due to the explosion of chemicals stored at the facility. Garrion knew the truth. The explosion was significant but there were also survivors. He witnessed them being gunned down as they exited the burning facility. It was hard to tell but he didn’t think they were part of his security forces. Perhaps they were some mercenary team? They spotted him and started to open fire, forcing a retreat back into the collapsing building.

Garrion managed to escape and went into hiding to recover and ponder his situation. His survival went unknown for a period of time but then the attacks started. Some small time thugs tried to kill him and evidence on the bodies led back to the Director, how amateur. Somehow the Director must have discovered his escape and sent some small time corporate thugs to tie up loose ends. He would have been smarter to send a whole team but in an effort to keep things small and quiet he underestimated Garrion. Garrion now knew what he needed to do. This would never end and he would be on the run forever. The Director and whoever was pulling his strings had to be exposed. This would take time, talent, and care.

Garrion went into the underworld of Night City. He embraced those he had protected the company from not long before. He was living on the edge, balancing the fence between light and dark, law and crime. He became an Edgerunner. 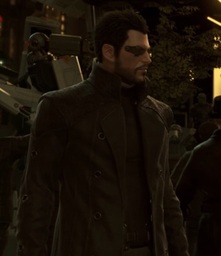