Security at The Gomi Emporium, an old soldier originally from Louisiana.

Gabriel was born in New Orleans in 2009, so he was just 10 years old when Hurricane Charlie flooded his city of birth, a catastrophe that left an indelible need to be able to survive on his own resources. He joined the US Navy at age 18 and five years later volunteered and passed the selection process for inclusion in the exclusive SEAL teams. He served with the SEALs for another 8 years, serving throughout the “Militia Wars”.

On leaving the navy in 2040, Gabriel went into the private sector and spent two years as a member of Armatech’s crack “Snake-eaters”, their notorous fast-response unit of special forces. From there, his career becomes murkier: fired for striking a superior officer, he drifted into freelance work as an “Edgerunner” mercenary for some time and may have been part of the team that failed to protect the exiled King William V of Britain from an assassin’s bullet in New Zealand in 2046. Shortly afterwards, he surfaced at the Gomi Emporium in Night City’s dockland, working for Lady Emily, herself rumored to be an exiled British aristocrat. He’s been there for three years now, and seems to have settled into his new job as her security chief and main strongman. 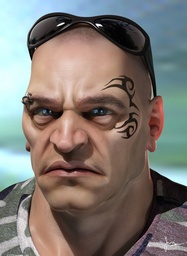