Enigmatic head of the Mutate And Survive collective

Reputed to be either a former Royal Marine or a former trained assassin for the NIRA – or maybe both – Finn is the strategic brain behind the anarchistic collective of edgers, punks, ecoterrorists and subversives known as “Mutate and Survive” and their pirate station “Radio Clash”. Little is known for certain about the man himself, other than that he seems to have a keen insight into exactly where to insert a lever and push for maximum disruption of the British ruling Junta’s plans. He’s regarded with awe by the vast underbelly of British society, and with fear by the regime’s supporters. 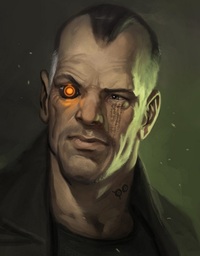