Driver/Guide for Combat Cabb, he knows every Zone in Night City

Combat Cabb, famous from the reality holo-vision show of the same name, are a small company based in Chi-Pits who specialize in dangerous taxi fares to dangerous parts of the urban sprawl. Dweezil is a typical of their drivers – an ex-military iconoclast, rough and ready, who loves to drive fast and loves to fight. He’s known for blasting old-school deep-dub reggae at his customers and affecting a Jamaican accent which isn’t really his – he’s actually from Los Angeles. 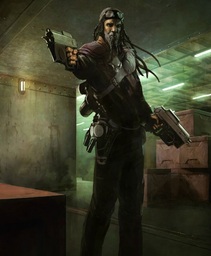