While no Jayne Xion, the beautiful Dominga has made herself a household name through popular (but often mocked) B-Pop albums with positive lyrics and catchy beats, numerous commercially successful (though critically denounced) Sensies, and a long history of steamy and intense flings with celebrity A-Listers and a few prominent politicians – not all of who were single when they first started dating the fiery Dominga! Another claim to fame is how well her “Secret Regenerative Therapy” has kept her looking, despite being nearly 50. 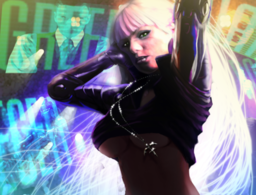