Chief Enforcer for The Bey

Desmond Battersea has come a long way from his humble roots as a boosterganger and pit fighter in the slums of Night City’s notorious “Sticks” shanty town. He parlayed his winnings from the pits into a small pawnbroker business in the run-down Kirk Park district, where he let some of his muscle turn to fat and first came to the notice of an up-and-coming junior lieutenant in the Corsican mafia, Friedlander Bey. The charismatic Moroccan at first cultivated Desmond as a fence outside his organization’s own structure and then encouraged the big man to mould his old gang, the Warrior Hearts, into a growing structure of allied gangs under Bey’s patronage that would eventually provide the basis for The Emir’s own private army, the “Imazighen”.

As Bey’s star rose, so did Battersea’s. He converted to Reformed Islam and became the war-leader of the Imazighen, utilizing an exoskeleton implanted into his flesh at key points to augment his own already considerable strength and a re-tooling of his old pit-fighter augments, as well as his own native craftiness and his learned experience in organized crime to become a truly formidable enforcer for The Emir. Today, Desmond Battersea stands ever at Friedlander Bey’s side as his staunchly loyal “right hand man”.

Desmond still has the violent instincts of his youth, only somewhat chained by the needs of “doing business”. He’s regarded with even more fear than the Emir himself, and often he does what The Emir needs done but doesn’t need to know about. He’s dour and abrupt to the point of hostility with most, but can be gruffly warm with those he trusts. 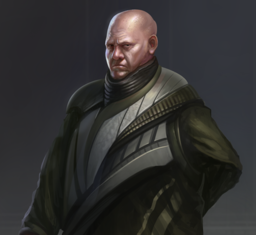