David Elkins is a man of average height with an athletic build – not hugely muscle-bound, but no scrawny kid either. A subtle web of cybernetic circuitry surrounds his eyes, and Elkins typically wears large, opaque glasses to hide it. His features are hard, but overall handsome. He wears his brown hair a bit longer than is typical in a corporate suit, and his sideburns are a bit of an affectation. During work hours, Elkins typically wears a stylish business suit, though there are rumors that it is actually a heavily-armored stealth exoskeleton capable of greatly enhancing his already prodigious strength.

David Elkins is a product of the Socialist Republic of Canada’s premier intelligence agency, the Security Intelligence Service. After working there for over two decades, Elkins took a lateral transfer to the SIS’s primary sister agency – Rossum Universal Industries, specifically the Special Projects Division, Rossum’s ‘black bag’ operations unit that does everything from corporate espionage to assassinations for hire – all in the service of Rossum’s primary shareholders, the Canadian government itself.

Little is truly known of David Elkins, though much is speculated. As head of Special Projects for Rossum worldwide, Elkins directly manages somewhere between four hundred and four thousand operatives and numerous support staff, but it would be a mistake to assume that he’s simply a ‘manager’. As a highly trained espionage expert at one of the world’s top intelligence agencies, Elkins is almost certainly not only highly trained but also highly augmented, with all enhancements both covert and hardened against EMP attacks.

Elkin’s personality is typically hard and patriotic, but he has been known to let his guard down and laugh or make jokes on occasion, though those occurances may just be carefully-calculated social manipulation attempts all to serve a hidden agenda. Within Rossum, the man has a near-mythical reputation and absolutely nothing is taken for granted where he is concerned. 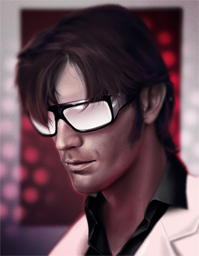