Pritchard was until recently on the fast-track to success at Whirlwind Security, graduating top of her class from their Cascade City academy and being posted to various duty stations where she excelled – until she was made Captain and head of a Rapid Response Team at the Whirlwind facility in Core Night City at the incredible age of just 26.

That’s where it all began to unravel. Leading the team on what they’d been led to believe was an incursion of Zoners stealing scrap metals at the Leng Environmental plant in Docklands, she ordered her five-member team to open fire on the large gang of boostergang thieves who were causing untold damage to the Leng plant. However, Whirlwind had been duped by Leng executives at the plant – the thieves were actually zoners rioting because they’d discovered Leng was storing dangerous wastes in poor conditions and the waste was leaking out downstream the Cargoland combat zone.

So far, so normal for corporate excesses, and the massacre would have been buried if there hadn’t been a pair of independent pirate media reporters live-streaming the protests and the reason for them, with hacker backing to ensure their footage got to the outside world. Shots of leaking drums of toxic waste burning in the glare of tracer rounds from heavy weapons carried by Pritchards power-armored team as they cut through the crowd of zoners, many of whome were women and teens, captured the glare of national publicity for a news cycle. Whirlwind refused to apologise or be contrite, correctly blaming the Leng plant manager for the massacre, but shuttled Pritchard off sideways to run security at Talking Rock Tower, a Glitterati condo complex where she’d be away from follow-up media until the heat died down.

Pritchard has been left shaken by these events, and she’s compensating by being even more gung-ho and by the book than she would normally be. She’s also extremely sensitive to even implied criticism, knowing her career is on hold right now but could take a true nose-dive if there’s another negaitive incident blotting her record. 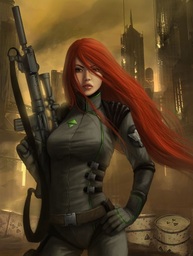