'Father of Desiderium Cartel' and 'Faceman of Lazarus Group'

The gentle hum of a data reading device spins up in the darkness of a run down hotel suite. Under all the grime and age, if one knows what to look for, the lost opulence is akin to the sun behind ash.

Hackamore: Mr. Cypress, I trust our accommodations are suitable.

Cypress: Mr. Hackamore, yes sir, they are superb. I have no doubt the meeting with the New Bangkok land barons will go off without a hitch, they don’t know the value of drilling rites in the Thailand Gulf.

Hackamore: Superb, that’s why we sent you Cypress. You’ve always been good at forcing the hard sell. We’ve little doubt in your ability and look forward to you return.

Cypress: Thank you sir, we should be drilling by the end of the third quarter.

Hackamore: Good luck Cypress, I always liked you. As always NEM looks after its interests.

::Click:: The reader sits idle at the end of the short message from another life, a life of wealth and respect. How was I to know Eddie was trying to warn me in his own way? New Bangkok, so much for the profit loss margin, so much invested already and only the heads new a larger corp. had already shifted its gaze onto the Gulf. When it comes to the corps, even when you think your important and powerful…you’re still just another resource to be traded and spent. I was supposed to die there, their fall guy, the sole focus of blame for all the investors. Somehow, what Eddie said nagged at me, enough I hired some local guns and was on edge for the meeting. It’s good too, the locals were absent and in their place was a team from Dinamika. They were interested in the command codes to our equipment and handing over all data collected on the mineral reserves. They knew what we had but taking it was cheaper and faster than going through the process all over again, this changes everything, drilling will commence by the middle of second quarter…

That’s when the chaos began, I was just a bait to lure Dinamika out, NEM knew what they were up to. A dozen bodies were on the ground before I got back to the armored Sedan. A rough ride to the docks and thirty thousand credits later and I was on a rundown sloop in the Sea of Bharathdesh. It did not take long to find out NEM had placed all the blame on the Dinamika losses on me, showing the paper trail for my armed guards. It’s been five long years since then, evading bounties and building my contacts back up, in the end I’ve even out lived the New Bangkok mining venture. It’s been a rough life, nearly died a dozen times, but its good to be the boss. No longer are you a resource, you’re value becomes incalculable and you become a man again…no longer a pawn to be traded. 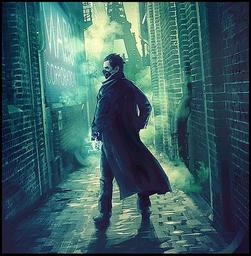