Bianca Klieber is a quite brilliant scientist in the field of biogenetics. She worked for the Japanese biotech megacorp Enyogeni at their Cascade City labs until two years ago, then disappeared. It was assumed one of their rivals had headhunted her and were keeping her somewhere under wraps at some secret research arcology. However, she has since turned up in Night City as a suspected member of the 23enigma terrorist group.

Bianca is, or was, a specialist in the area of gene-tailored viruses and bacteria, used to produce pharmaceuticals, bio-fuels and other complex organic compounds in bulk at low cost. She worked on a project which infected a host with bacteria which delivered neurochemical blockers which meant the human psyche didn’t have as many problems accepting cyberware installations, enabling larger ‘ware installations for the military without turning out cyberpsychos. She was team leader on another which delivered a virus which re-wrote blood cells so they’d carry a perfluorocarbon compound which holds up to four times more oxygen than naturally-evolved haemoglobin, vastly increasing both stamina and short-term exertion.

Unfortunately, while working on a new Top Secret project for EnyoEnyogeni, Biance became addicted to a home-brewed neurotransmitter analogue of her own creation, one manufactured by another gene-tailored bacteria and which gave the user a feeling of mental clarity, peace and calm for several hours but would, as it broke down, create symproms of paranoia and panic. She was sent for detox at an Enyogeni rehab facility in the deserts of SoCal but a team of what seemed to be black-ops troops broke her out from the compound and she disappeared.

When next she re-surfaced she was part of the 23Enigma terror cell that tried to blow up the Ottoman Hotel using a bacterial bomb that was probably of her own devising. Captured by the Lazarus Group but released by Candyman at the time he left that team of Edgerunners, she is now believed to have returned to SoCal, but that is merely conjecture.

Bianca is 33, quite probably still an addict and likely using modified or stolen micro-organic 3D printers to assemble her homebrew drug, possibly along with other research. 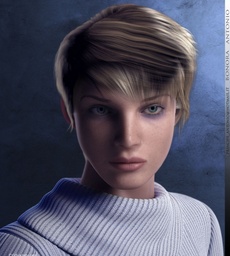