DreamCorp’s chief guru in Night City. His official title is Chief Scientific Officer, TRC but he’s so much more than that. Styleman worked for the NSA as a sysop in his early years before defecting to SoCal and DreamCorp about eight years ago during a leveraged headhunting operation . He’s since developed techniques in sensie editing involving layering CG content over sensie data that you may have experienced in DreamCorps blockbuster sensie series “Conan and Red Sonja”. His team developed the processes that let DreamCorps make a seamless fantasy sensie experience, and blow the opposition away. There have been three attempts at leveraged headhunting since, so he’s under a security lockdown and lives in an apartment at the DreamCorps TRC facility in Bay point. 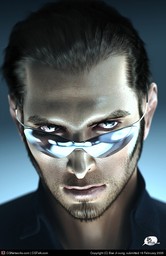