Andrew Mitchell is a tall man with sandy-brown hair and an easy smile, fond of casual clothing and making the best out of what life gives you. Andrew has a chiseled face with classical features – a result, along with his intellect and hardy constitution, of the embryonic genetic tailoring purchased by his parents during his gestation. The only physical feature to mar Andrew’s athletic body is a single scar over his right eye, a byproduct of an accident involving racquetball, a door that wasn’t quite closed all the way, and Andrew’s desire to avoid cosmetic surgery – not quite the tale of bravery and danger that he tells the ladies at the bar after work.

Andrew Mitchell was born into the upper section of the Prole class and given everything he could have wanted – money, cars, a good education and a near-superhumanly ‘perfect’ genome. As he grew up, Andrew squandered nearly all of it; despite all of his genetic tinkering and expensive tutors, he just didn’t have the passion and drive that drove his parents to success. Instead, Andrew opted for what amounts to mediocrity – doing enough to get by and relying upon his innate talents to make up any deficiencies in his motivation.

Andrew is currently a cybernetics technician at Rossum Universal Industries’s Night City offices, and his easygoing manner extends not just to his coworkers but also the ‘patients’ he works upon. It isn’t uncommon for Andrew to attempt to befriend one of the Slates he works with, though a Slate returning his overture isn’t particularly common. 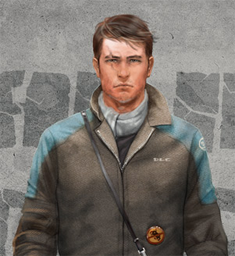