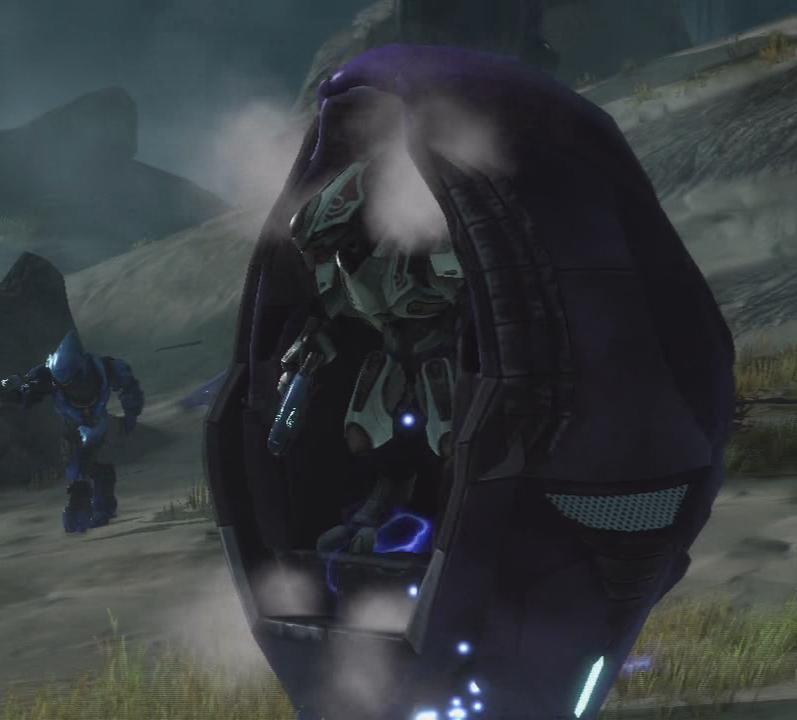 The debris and smoke continue to rain from the newly-opened hole in the ceiling, bathing the entire chamber in a fine layer of caked concrete dust. The pitch-black orbital drop pods continue to open up, revealing their deadly payloads – but the process isn’t quite as instantaneous as their arrival, for even power armored shock troopers have human reflexes. At the moment, two of the pods have already opened, revealing the sleek black humanoid shapes within. Their weapons are raised, not at any particular figures but towards the giant computer at the front of the room – and even the smaller of the dual barrels upon their rifles looks almost large enough to fit a man’s fist through your eyes.

The seven-foot-tall hologram of Anita stands tall, stepping between the Lazarus group and the interlopers. She simply stairs at them for a moment before whispering ‘Brother’ – and then, with a dramatic flair, the hologram disappears.

Mac stares briefly at the drop pods before raising his pistol. “Brothers! To arms! Protect your mother! Beat them back! Runners, my Brothers will hold them, get to the exit!” He fires off a few rounds at the nearest black humanoid shape, each finding their mark with relative ease, making disappointing sounds as they strike the armor.

A sound almost like a million automatic doors all opening as one reverberates throughout the chamber as the manufacturing pods placed every few feet around the room open up as one – every last one of them. Though most don’t contain a fully-formed android, even the ones that are just a skeletal torso attached to two stumpy legs crawl forwards, moving towards their targets with a grim determination.

Seranya steps towards the giant computer that holds the Enigma AI, her hands grasping the control interface in the center of the room. Seemingly ignoring the metal invaders, she simply stares up at the tank, worry in her eyes. Wormwood sends his chair into motion towards the nearest exit from the room, a hallway at the rear corner which might lead anywhere. Meanwhile, he fires three rounds from one of his pistols square at the face of one of the suited figures, without any hope of having an effect. As expected, they simply deflect from the armored visors with a series of sharp “spang!” noises. He yells at Siri, “Fer Klono’s sake, girl, get a move on or give me back my rifle!”

Pacoy hesitates, trying to think of a way to phrase the only viable plan he could think of without offending Mac, but with a grunt of desperation, decides to just be blunt. Scurrying for cover while readying his rifle, Pacoy shouts “Mac, can you call all of your ‘siblings’ to throw themselves into things and buy us some time?” Mac grits his teeth, flashing back to the pain he felt when he was disconnected from home the first time. “Pacoy, they’re moving as fast as they can! We need to get to the exit so we can get out of here. They will buy us time, if they need to!”

Three more drop pods begin to open as the occupants of the two already-open ones finish aiming, moving an arm forwards to engage the arming mechanism on their micro-missile launchers. They make no move to even recognize the existence of the Edgerunners.

Eris hits the ground running, barely turning enough to toss a camera bot behind her as she makes her way at a breakneck pace past Wormwood and towards – hopefully – an exit. Pitbull stomps into a heavy footed run towards the exit, snagging up the handles of Wormwood’s chair without breaking stride and pushing him as fast as his heavy boots can take them. Mac skids to a halt, staring at his sister in shock before bolting to the central tank. “Sis, come on! We need to go! NOW! The rest of you, keep moving! I’ll catch you up!”

Suddenly, Mac doesn’t feel such an urgency to leave. A peace begins to settle over his mind the moment he touches Seranya; a serenity so beautiful that all thought of the soldiers in power armor behind him fades to nothing.
Half-manufactured androids begin to reach the soldiers, their arms – strong as steamshovels, begin to pull and grasp at the sleek black armor. Their grip is strong – but the armor is stronger, for now, as the soldiers manage to remain upright and with their weapons pointed forwards as they all but ignore the hordes closing in upon them.

Seranya continues to remain stock-still as a light begins to shine, almost as if from within her body. The holographic generators whine as Anita appears once again, standing out of the console directly in front of Seranya. The hologram bends down, embracing Seranya in a kiss.

Wormwood shouts “Mac, what’s wrong?” as he continues to wheel at best speed towards the room’s exit. He figures he’s going to lose a very expensive rifle, which rankles, but it isn’t worth losing his life over. Pacoy looks over his shoulder, hesitates for an instant and then curses, “Over a goddamned toaster!” and rushes back to try and rescue Mac.

The ‘wo-oo-oo-oomp’ of five near-simultaneous micromissile launches hisses through the crowded space, almost loud enough to drown out the sound of truly heavy artillery firing on the ground above. The missiles streak forwards, smashing into the Enigma computer matrix, burying themselves deep. The final seven drop pod doors open, their cargo opening fire on full auto with their 10mm chain guns, ripping into the robots that surround them.

Eris disappears around a bend, diving for cover as the sound of gunfire reaches her ears. Pitbull scowls as he notices that Seranya hasn’t moved from the vicinity of the firefight. He lets go of Wormwood’s chair and bolts over to Seranya, preparing to throw her over his shoulder as he yanks her from the spot.

Mac’s eyes return from their glaze, pulling out of the warm trance of being near his mother, sound rushing back to his ears all too quickly. He sees himself surrounded by his real brothers, glad to see Wormwood is closer to the door. He rapidly scans the machine in front of him, and his eyes fall on a reflection of his sister. A smile creeps across his face. “Pitbull, grab my sister and move! Pacoy, see if you can grab one of my fallen brothers. May need parts later – both of you keep me between the bullets and yourselves. There’s no time to argue!” He sets himself between his friends and the incoming cavalcade of fire.

The sound of an industrial saw revving up to speed and beginning to slice through metal pings harshly off of the chamber’s walls, though not a single scream can be heard even as the manufacturing complex begins to turn upon the armored intruders. The hologram of Anita begins to freeze, jitter, and hop around as the projecting computer takes in the missile fire, but as it does so it seems to lean forwards, whispering into Seranya’s ear.

Wormwood finally reaches the room’s exit, coming into a hallway that curves around the computer chamber. Eris is lying against the wall, sticking a fiber cam around the edge. He begins to wheel past her, shouting “No time, you stupid bint!” He leads around the corner with an outstretched pistol, what it’s viewfinder seeing fed directly to his optic nerve by the cable jack in his head.

Pacoy sighs, relieved to see Mac snapping out of his OS Freeze, or what ever it was, and runs to the struggling frame of a intensely creepy unfinished, skinless Mac bot, scooping it up and heading for the exit. Mac is so paying the therapy bills on this one!

The tank at the head of the room suddenly glows with a blue fire deep inside. The Anita hologram looks to the sky with a scream as she explodes into a million motes of dust, a fireball streaming out of the computer tank moments later, slamming everyone at the front of the room to the floor – with the lone exception of Seranya, who stands tall and proud against the backdrop of the explosion – until it dies out, and she falls to the ground as if a puppet whose strings were cut.

Eris slides backwards into the far wall, a look of shock on her face. “Oh shit, oh shit!”

Pitbull scoops up Seranya and tosses her over his shoulder as easily as you would a laundry bag, and bolts to the exit, fighting through the accustomed disorientation of being in close proximity to an explosion. Mac reels on the ground, trying to get to his feet. “Dammit, Pitbull, just run! Go! I’ll get Pacoy! Shit. This isn’t how this was supposed to go…”

Mac’s words are poignantly punctuated by the sudden onset of darkness and silence as the giant computer goes dark – and with it, the room.